This e-mail address is being protected from spambots. You need JavaScript enabled to view it.

The roles of the Moderator are many and varied.  Together with the Synod Pastoral Committee I, in a range of ways, offer support and care to ministers and churches and, though the diary is sometimes challenging, try to be available to respond to the needs of both.  I see many good things happening across Eastern Synod and enjoy the challenge of offering a small measure of support to the very many good things that are happening ‘on the ground’.

Together with colleagues who serve as Moderators in the other twelve Synods I have a particular role of introducing prospective ministers and prospective pastorates to each other.  At this point this time we are hosting the URC ministerial vacancies’ Profiles pages which can be accessed by the menu to the right of this page.

Our March Synod celebrated with Revd Paul Whittle - Reflections on 40 years. I have somewhat ambitiously entitled this 'Forty years (and what next) of ministry'.  I do not really have the space to tell you about the forty years, though I will try and offer a few samples, and I don't know what the 'what next' will be. I do believe in strategies and planning.  We need a vision. However, I have learned that God usually has a few twists and turns that we don't see coming hidden in there somewhere.  Maybe there won't be any more surprises, but somehow I doubt it.    But let me turn the clock back forty years.  It is a Friday in March 1979.  I have moved from Wigan, where I had spent a few months with my parents and siblings, post theological training, and am now in Beith, North Ayrshire, where I am to be ordained as a Minister of Word and Sacraments.

It was early breakfast, just after 6 am, today as we were going to Mutare, about 270 km from Harare, so leaving about 7 am. I was travelling with four of the folk from Presbytery and further along we met up with a second car, driven by Paul Neshangwe, which had the General Secretary and Chief Finance Officer of the Uniting Presbyterian Church, here from South Africa, a representative from the Presbyterian Church USA, and the Convenor of the Presbytery Church in Society Committee. We arrived at Mutare around 10.30 going to the African Regional Resource Centre, a relatively new Presbytery project which we were there to visit.

Over two years ago, the Presbytery realised that they had a large chunk of land on the outskirts of Bulawayo, in an area know as Vimridge, that way lying largely unused. A small portion of it had been squatted but, for the most part, it was simply running wild. The decision was taken to develop a significant agricultural project, the plan being to use it to generate income in order to support ministerial stipends which are often not paid by congregations that are really struggling in the current economic situation.

Every time I visit Lovemore House it is doing something different. The first time I visited it was home to a small group of boys, who would otherwise have been on the streets. I remember how they loved their football. Last time it had become the Presbytery office and a bit of a conference centre, but was somewhat under-used. Now it has become a training centre, though the Presbytery office is still on site. The building, situated in the Cranbourne area of Harare, out towards the airport is a fair size and in reasonably sized grounds.

Mbereshi is a long way from Lusaka, almost six hundred miles. It would be quicker and shorter to cut through the Democratic Republic of the Congo, but that would mean leaving the country and re-entering, which was not feasible. Driver Moses and I left Lusaka at 6.40 am, arriving in Mbereshi at 7.10 pm, with little stopping en route. When we arrived we were greeted by Alison, torch in hand, as the power was out, part of Zambia's programme of 'load shedding' leading to interest in solar power and its possibilities.

Report of my his visit to the United Church of Zambia and, in particular to Alison Gibbs, Mission Partner from the URC to UCZ, 1 – 8 December 2017. Passport Control on arrival at Lusaka is an interesting and challenging experience, with loads of people and no clarity, so far as I could see, as to where to queue. However, eventually I got through and was delighted to be met by Moses, one of the UCZ’s drivers. Moses drove me to the Catholic Guest House, where I was to stay for the first night, past lots of little roadside stalls, some selling clothes, particularly dresses, shoes and other fashion items, and many others selling food, mainly tomatoes and other vegetables and fruit. Some were cooking, for example corn on the cob, and selling these.

Visiting the Diocese of Vellore - February 2015 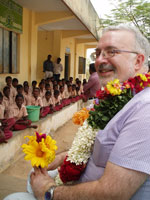 Vellore itself is a large city, with a population approaching 180,000, but set in a wider area that, though with a number of large urban centres, is quite rural. I was asked to lead a group visiting Vellore with a particular emphasis on links between schools.  The Cambridgeshire RE syllabus has a unit on Vellore with reference to life, and especially to the church there.  Our group of eighteen included eight teachers, three others with school links, three clergy and sundry others.  Four of the group had been on a number of church visits to the Diocese but, with one exception, for the rest of us, it was certainly our first visit to that area and, I think in all cases, to India at all.

When you read or hear about India, you get the feeling that going there will be something of an assault on the senses.  I certainly found that to be true.

Download: Visiting the Diocese of Vellore Paul's Report and Pictures

Belonging to the World Church Partnership with the Zimbabwe Presbytery of the Uniting Presbyterian Church of Southern Africa.

It was over all too quickly!  What a delight to welcome six visitors from the

Presbytery of Zimbabwe from October 2nd to 13th 2014.  Inevitably there was not enough time, but we managed to see a fair bit and give them some feeling for life in the Synod with its mix of urban centres and rural communities.  Visits included St. Ives, where we saw the community café and fair trade shop as well as hearing about the life of the church, St. Neot's, where we were able to compare the challenges and possibilities of a high street location with the pioneering opportunities of the Love's Farm estate, Ipswich, where we met an interestingly varied bunch of church leaders and heard something of Tim Yau's Fresh Expressions work, Cambourne, where we heard about the achievements of ecumenical working in a relatively new community, and Long Melford, where we discovered something of the rural context that embraces many of the churches in the Synod.

The visit was arranged jointly with the Greenock & Paisley Presbytery of the Church of Scotland which also has a partnership with Zimbabwe, and the group will travel on to Glasgow for the second half of their visit.

If you are interested in knowing more about the Zimbabwe link, and particularly if your congregation might like to explore a possible twinning link, please contact This e-mail address is being protected from spambots. You need JavaScript enabled to view it.

Paul Back in Zimbabwe December 2013 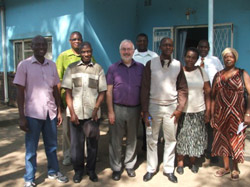 December 2013 saw my fourth trip to Zimbabwe as part of the link between the Presbytery of Zimbabwe within the Uniting Presbyterian Church of Southern Africa and the Eastern Synod of the United Reformed Church.It was good to be back. This particular visit was brief – just seven days, including those of arrival and departure – and included four main elements: conversation with the Presbytery's Ecumenical Relations Committee, about the continuing development of our link and, in particular, the possibility of the visit of a delegation from Zimbabwe during 2014; preaching at the Sunday service and visiting the congregation at Budiriro (twinned with Christ Church, Rayleigh); visiting the church and meeting the Elders at Mbare (twinned with Epping URC and St. Martin's Church of Scotland, Port Glasgow); and doing a little Bible teaching at the Kuwadzana Christian Training Centre.

Belonging to the World Church

The world global partner for Eastern Synod is the Uniting Presbyterian Church of South Africa, Presbytery of Zimbabwe.  At present three Churches in the Synod have formed links with churches in Zimbabwe.

Find out more about Vision4Life; Vision2020 and Fresh Expressions.

The aim of the Newsletter is to improve communication across the Synod, which will require your input and feedback to help in offering worthwhile information.

Find out who's who on the Synod Office Team.  If you are unsure who to get in touch with, use the Contact Us form and your query will be routed to the right person!